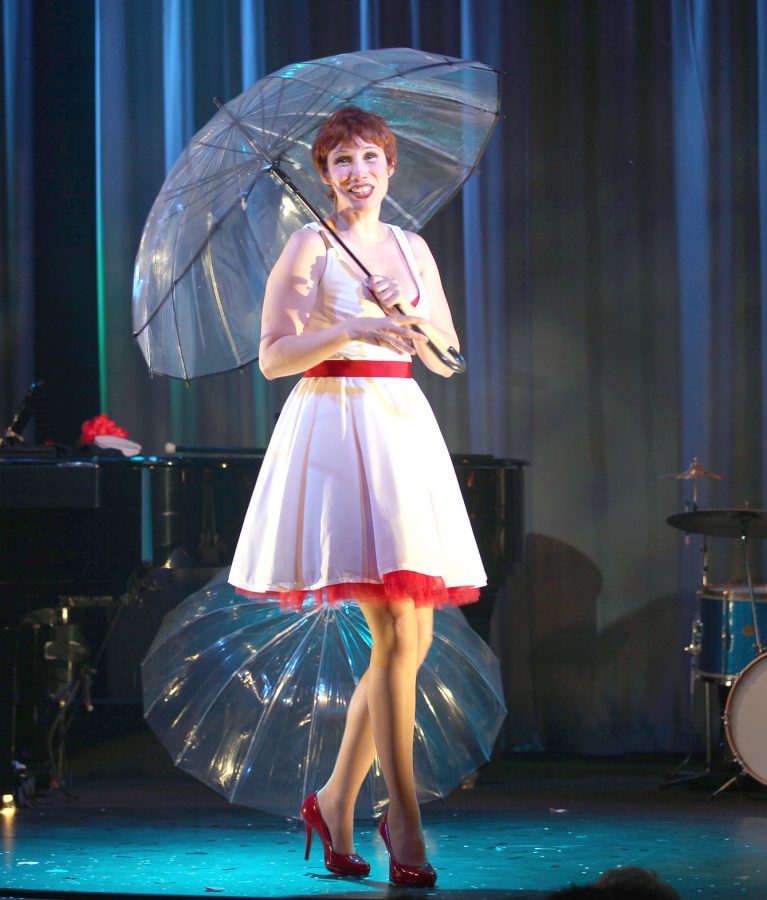 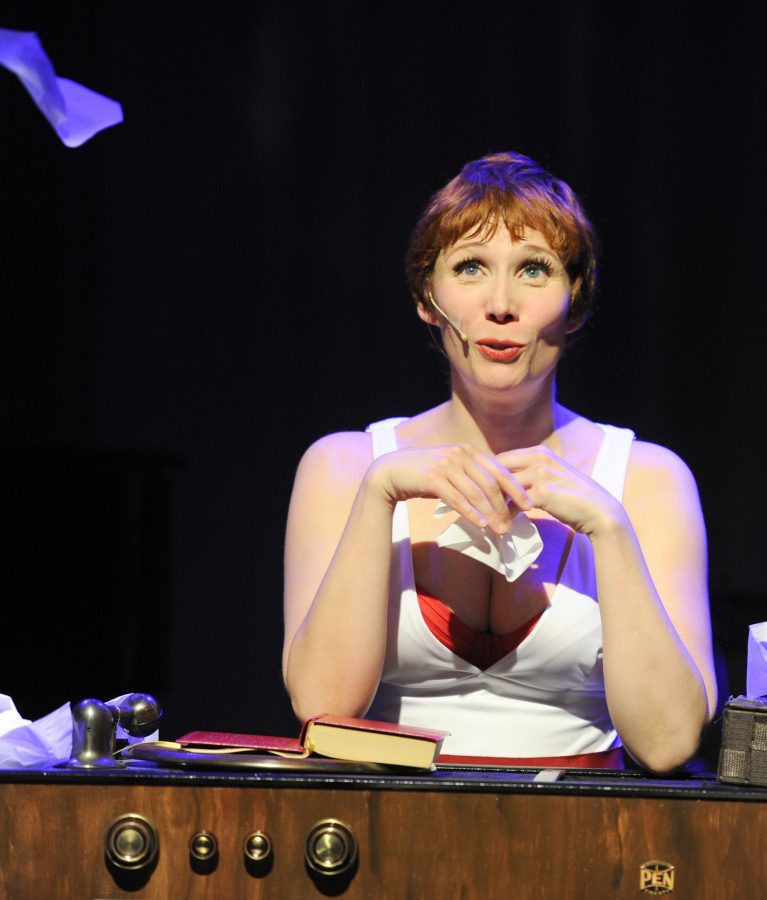 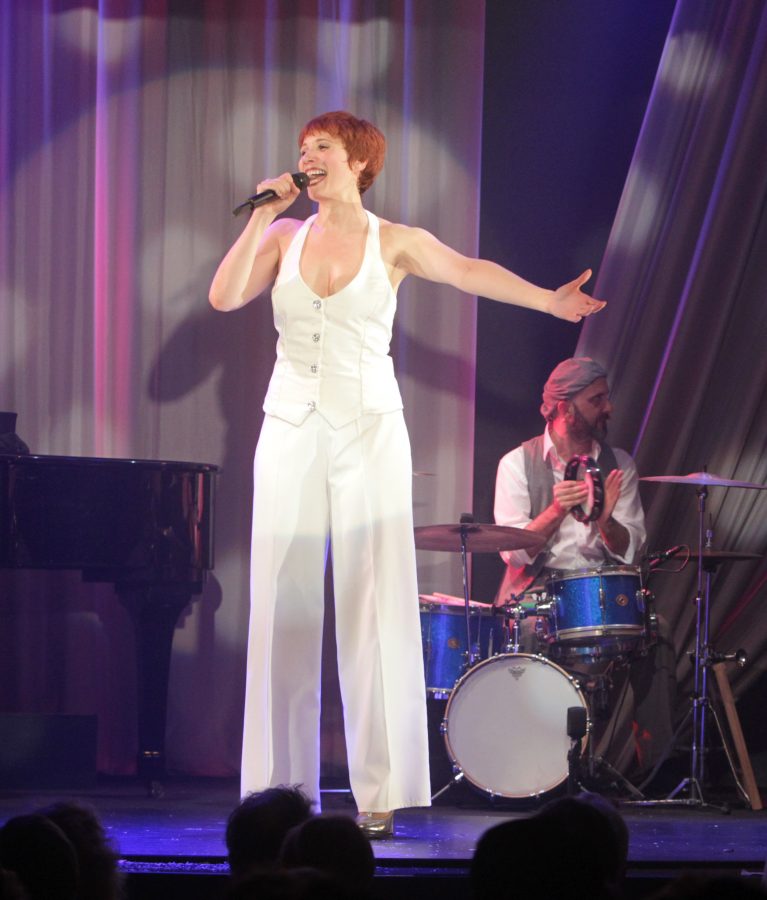 Broadway with a little French twist

Prepare to be enchanted!

Mary Poppins, West Side Story, Singin’ in the Rain, My Fair Lady… Isabelle Georges and her all-star band lead us on a dizzying journey through the very heart of Broadway. From Cole Porter to Irving Berlin, George and Ira Gershwin to Jerome Robbins and Leonard Bernstein, all with more than a little French flavour.

With dizzying rhythm and gaiety, Isabelle Georges proves with virtuosity and originality that musical theatre is far more than a simple boy-meets-girl storyline: so much more than a simple pretext to sing and dance “cheek-to-cheek”.

Between a record-breaking version of singing in the rain, retracing the transition from silent movies to ‘talkies’ (in which the audience get a little more than they bargain for!) and an irresistible Mary Poppins-like flight, we discover the birth of a genre, originating from a melting pot of the music (Yiddish, Operetta, Blues, Jazz, Folk… ) of millions of immigrants singing their hopes of a better life.

Musicals were among the first to tackle subjects including: the abolition of slavery (Show Boat), homosexuality (La Cage Aux Folles), pacifists and the sexual revolution (Hair) while flirting with Shakespeare with Romeo and Juliette (West Side Story) and Kiss Me Kate (The Taming Of The Shrew) and class differences with George Bernard Shaw’s Pygmalion (My Fair Lady).

On stage, Isabelle and her four multi-instrumental performers each defend with talent and humour who, in their opinion, is the ‘greatest’: Judy Garland, Liza Minnelli, Julie Andrews, Gene Kelly, Fred Astaire, Leslie Caron, Ginger Rogers…

From New York, New York to Cabaret, from Bernstein to Gershwin, from tap-dancing to drama, a parody of a French coffee commercial (Try To Remember ) or a reconstruction of the Titanic (Titanic, the musical), Broadway Enchanté eagerly follows the advice of Cervantes (The Man of La Mancha): “Madest of all: to see life as it is and not as it should be”. 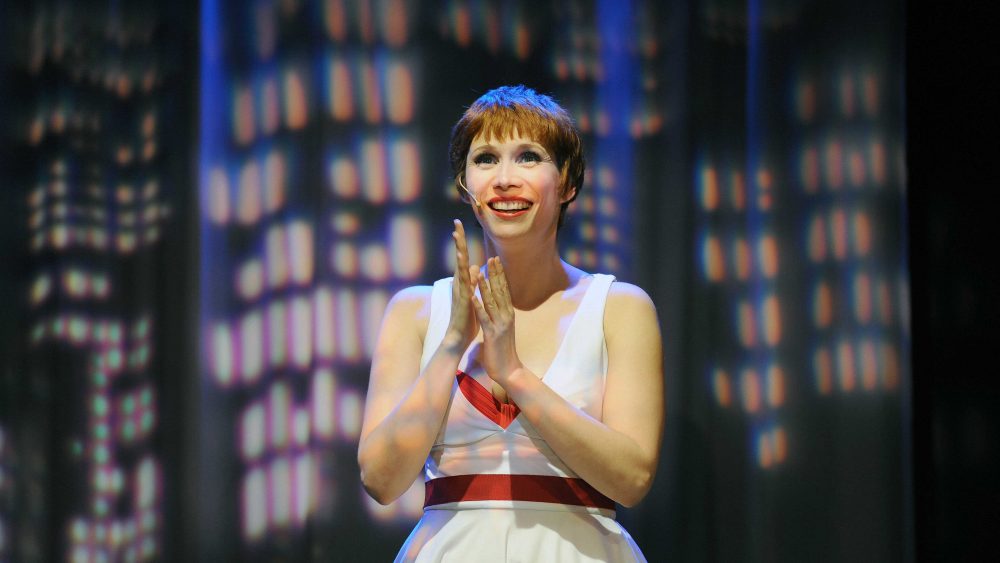 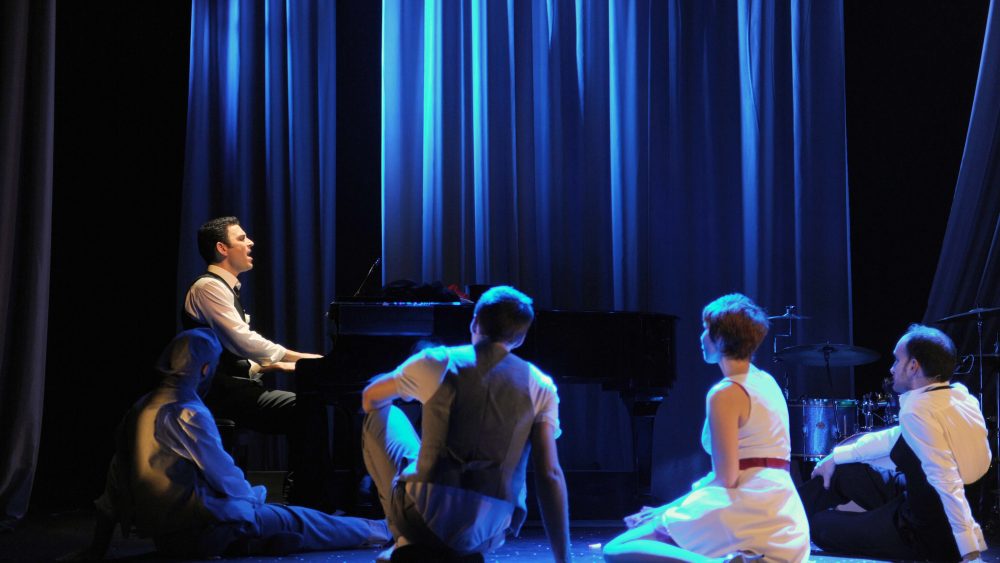 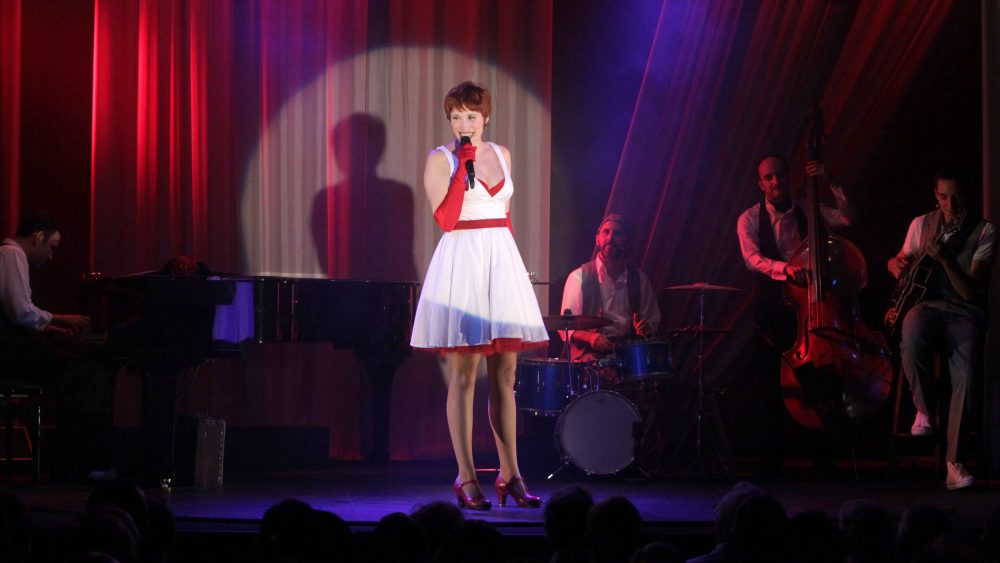 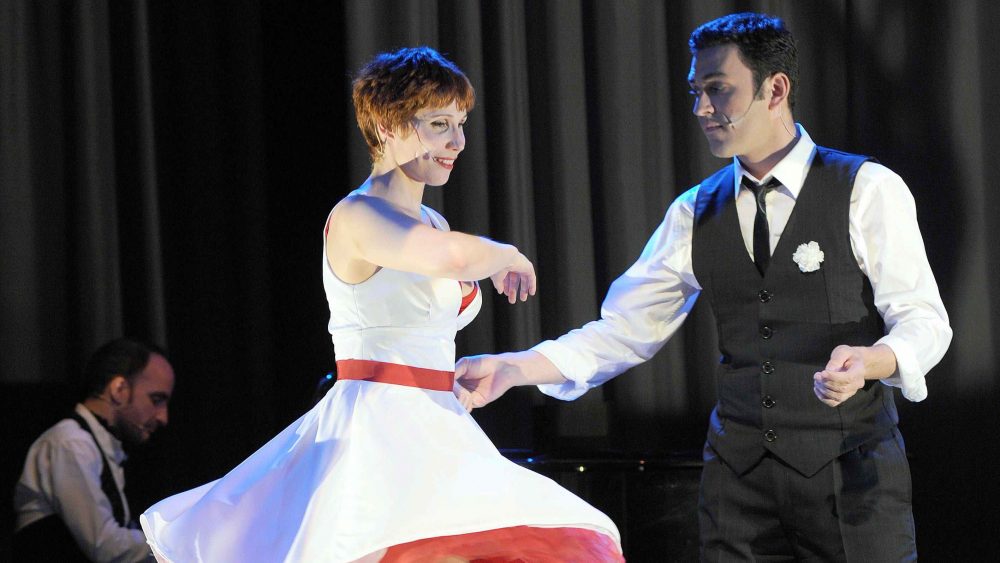 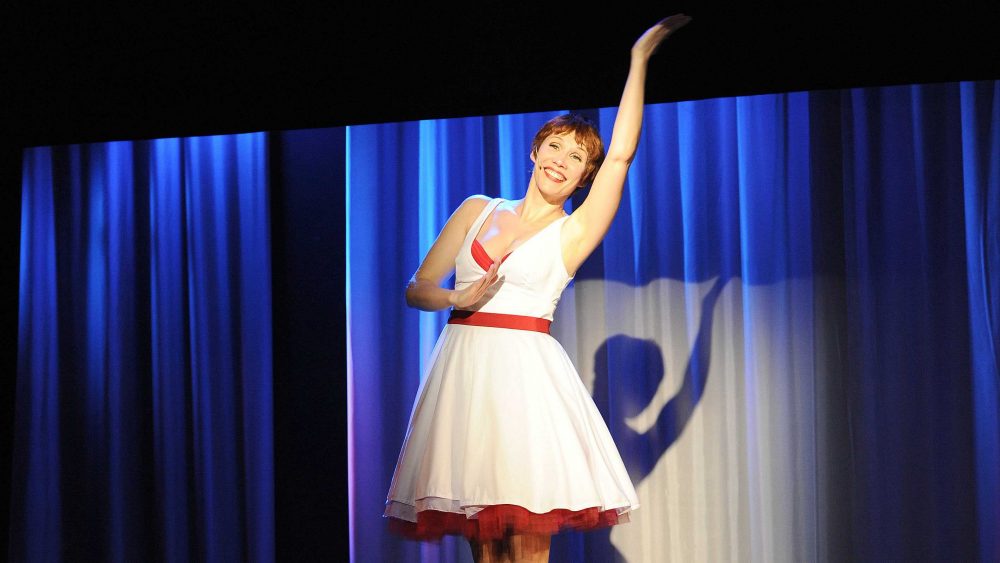 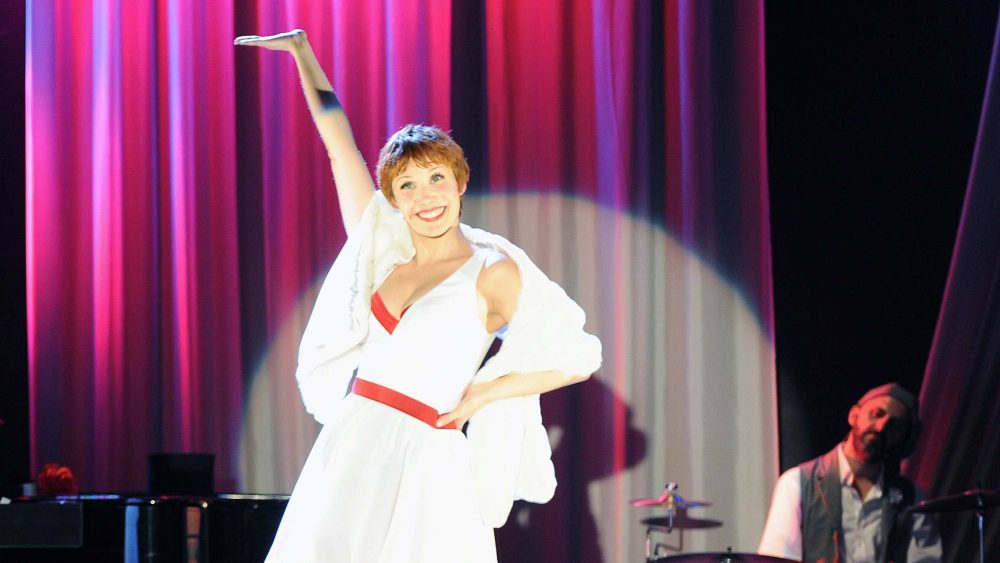 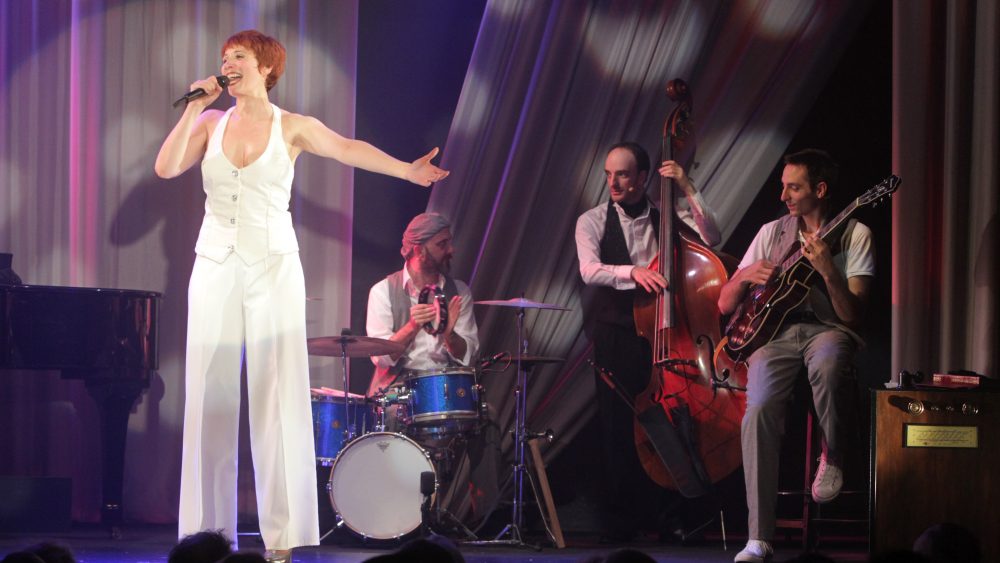 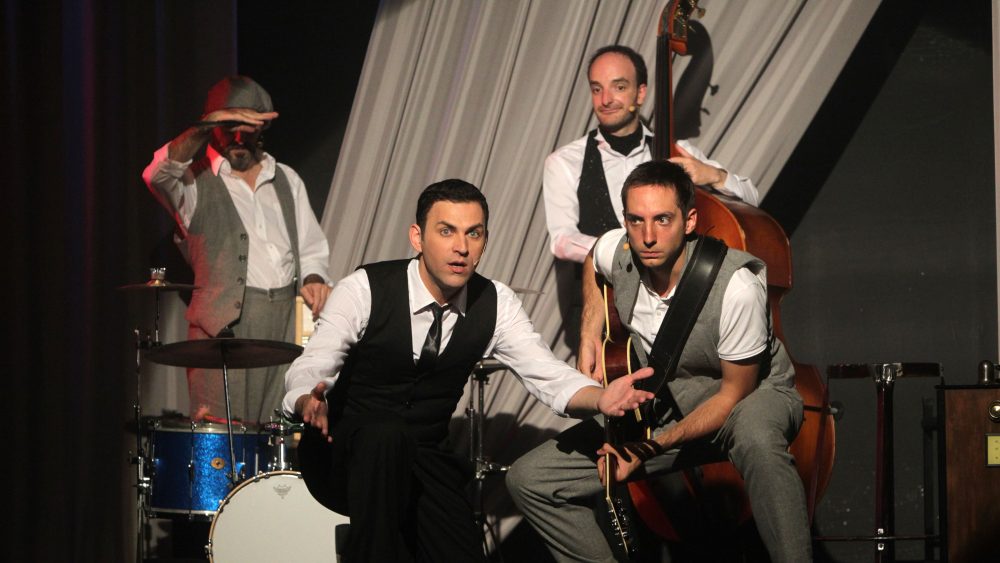 A few words from Isabelle Georges

My childhood was spent between my mother’s vocal exercises (she was a dramatic soprano), the stories my father told me (he loved poetry and jazz), and my grandmother’s scales (she composed music for stage and film). My vocation is born naturally from a mixture of classical music, jazz and theatre… the “Musical”!

Ah… My first nights-out with my parents at the Mac Mahon movie theatre, or at the Châtelet… My first emotions: Guys and Dolls, Black and Blue, Porgy and Bess, 42nd Street… From as far as I can remember, I’ve always loved musicals. The capacity they have to suggest that everything is possible; ridicule doesn’t exist… that we can sing “Je t’aime” out loud, dance on the ceiling or with garbage bins because we are happy, enter a painting, fly… Broadway Enchanté is born of an irresistible will to share my passion for musicals.

Parisian chanteuse Isabelle Georges loves Broadway melodies, and she brings us plenty in this 70-minute show. Most of the time she sings in English, but the mischievous tone is all French. There's enough energy on display to light the Great White Way itself!