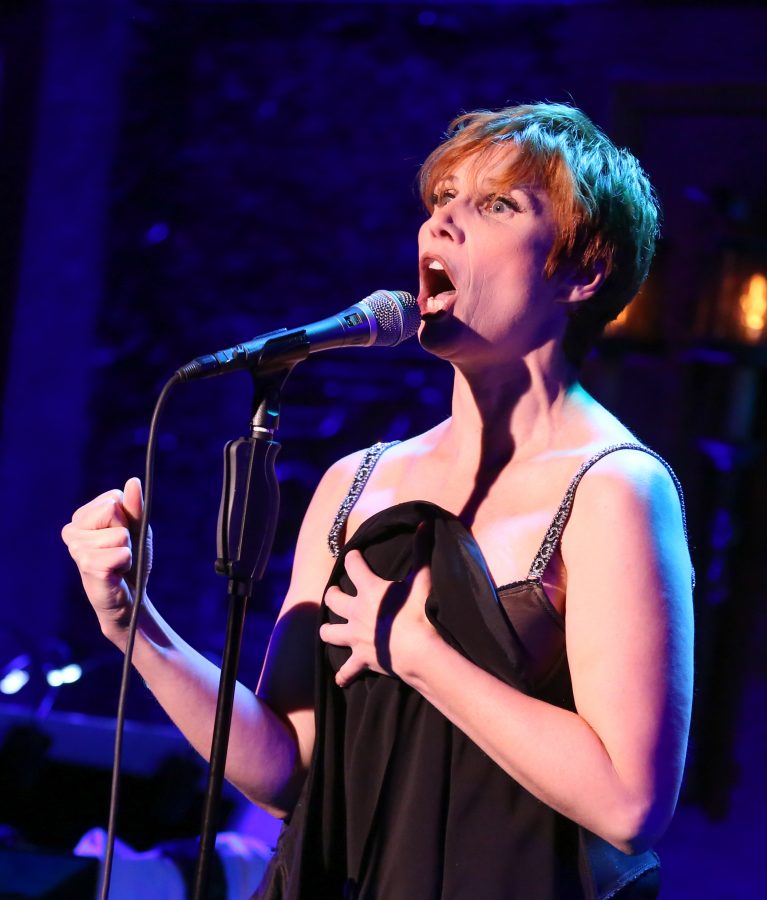 Being in a room when Isabelle Georges is performing is to be in the eye of the hurricane, and you will never want to leave. 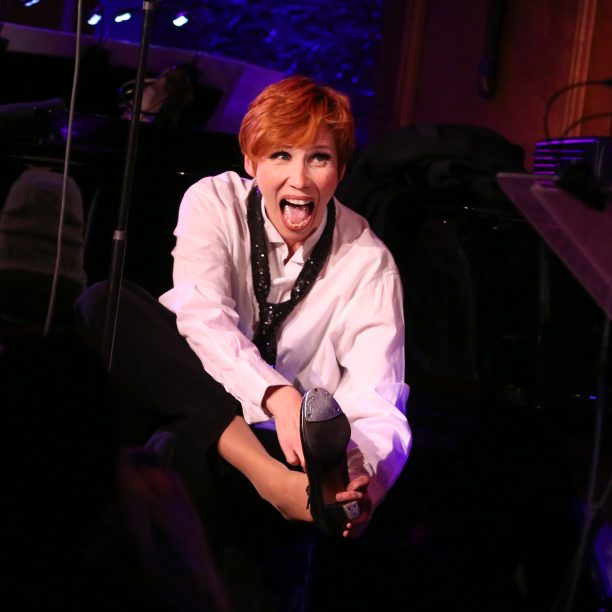 A wonderful review and some great pictures on BroadwayWorld on Oh Là Là at Feinstein's 54 Below.

The expression Ooh La La is used when you find someone or something surprising, unusual or sexually attractive. In France, the expression Oh La La is a different one, with a simpler definition: WOW. The two expressions are both used but they are, definitely, different expressions.

Isabelle Georges is the definition of both Oh La La and Ooh La La. It is, therefore, entirely appropriate that her debut show at Feinstein’s/54 Below last night was titled Oh La La. Ms. Georges is surprising, she is unusual, she is sexual, she is attractive, and most of all she is WOW. The sold-out crowd at 54 Below was a wonderful mixture of people who were either very familiar with her work or those who were seeing her for the first time. Those who already knew of Ms. Georges were relaxed in their seats as they watched unfold before them a happening for which they were prepared. The guests who were seeing Ms. Georges for the first time were not relaxed in their seats: they were alert and alive as, with each passing moment, they grew more excited and more enthralled as they were exposed to one of the most unique talents one will ever find on a nightclub stage.

Like a panel arriving to discuss the annual profits at a shareholders’ meeting, Isabelle Georges and her team of four musicians wandered through the dining room and up onto the stage, as a slightly startled audience of people looked up from their dinner plates, their drinks or their conversations and thought “oh, I guess it’s starting.” A knowing smile on her lovely face, Ms. Georges acknowledged the crowd with a benevolent scan of her friendly gaze, and the second the band was in place, she launched into an evening of entertainment that grabbed the audience and held them happily hostage for 70 minutes. Bold and fiery, the Frenchwoman has more energy than any one human should be allowed to have, hardly surprising since she would also appear to have more talent than any one human should be allowed to have. With a setlist made up of 17 songs sung in French, English, and Yiddish, Ms. George brought so much French to the room that one wondered if, upon leaving, one might find that they had been magically transported to Paris for a look at what real French cabaret looks like. Indeed, during the departure from the club after George’s show, one guest was overheard to say “I always thought this was cabaret would be like, but until tonight I never saw it.” Often when meeting people from a specific place, it can be easy to forget their origins. There can be people with whom one speaks while forgetting that they are a Texan, a Californian, a New Yorker… there are even times one might forget they are communing with a Brit, an Italian, a Swede, even while listening to their native accent roll beautifully off their tongue.

There is NO getting around Isabelle Georges’ Frenchness. The accent alone is proof positive that Ms. Georges vient de France – but every fiber of her being cries out Parisienne! Parisienne! Isabelle Georges embodies, to the nth degree, the art of cabaret, the sensibility of an artist, and the spirit of France. Using the songs of Jaques Brel, Charles Aznavour and Charles Trenet, Ms. Georges takes her audience on a journey into another world, some of it relating to her own life, some of it detached but palpably personal. Obviously, not all of her audience understands French (and certainly not Yiddish), yet there is no translator required for one to understand what she is singing, for a person to follow along in her story. The language barrier is efficiently and eloquently broken down by Georges’ powers as an actress, leaving audience members breathless and electrified from the sheer force of her tidal wave of energy, even in the quietest moments of her powerful storytelling.

Ms. Georges’ must work from a script – nobody could be this spontaneously perfect in the delivery of their rhetoric, and yet her presence and performance never suffer from sounding rehearsed or by rote. At no time is there a feeling of confinement from the French ball of fire. There is prose that is specifically designed to paint dramatic pictures and there is humor particularly picked to elicit belly laughs, but every word spoken appears to be born in the moment, as though the thoughts are coming to Georges as she stands before us, delighted to have plucked from the air the perfect sentences to express the thoughts racing through her mind.

Isabelle Georges brings to the stage and to her show an absolute reverence for the material which she is presenting and that reverence has informed the cast members of her play, as she has chosen only the greatest to assist her in bringing all of the emotional content of every note of music heard last night. With Thomas Hubbard on Double Bass, Ray Marchica on Drums and Aaron Heick on Reeds, Georges has even greater opportunities for the buoyant celebration of the music, the stories and life, as she gets down with each of them, her admiration for their mastery showing at every turn. Her relationship with musical director and pianist Frederik Steenbrink, though, is a continual combustible marriage of musical greatness. The duo clearly has a connection and chemistry that would make jealous anyone wishing and hoping for a partner in crime and creation, and that is as it should be because Georges deserves to have a maestro who is as magnificent as she is.

It would be appropriate to make an attempt at equating her with other great entertainers of the past. Perhaps Piaf, maybe Garland, perchance Baker, conceivably Minnelli, peut etre Midler, possibly Charo, – only it doesn’t work. No comparison to another artist could ever, fully, capture the experience of watching Isabelle Georges work; but, then, that is true of each of the women whose names were just listed. They are originals, they are individuals, they are unique. That is why they stand out. And Isabelle Georges stands out. She is that rare combination of theatrical and practical that makes one memorable. Who else could stand on a stage in a sheer, beaded bustier and bare feet, singing Chansons while dancing around a stage to music created by musicians she openly praises to her audience for being hot at the same time they are talented? A diva.

And this diva CLEARLY is in love with what she does. The least self-conscious person ever to set foot on a stage, Ms. Georges is so at home that she could, conceivably, be doing this show while drunk, in her living room… but drunk on champagne, naturally. With unbridled abandon Isabelle Georges changes costumes in front of her audience, cracks jokes about her 54 Below amenities, fiercely tap dances in a four by four space, ruffles the hair of her bandmates, flirts with her audience, dispenses wisdom Yiddish, French and human, pulls faces, goofs off, makes hand puppets and silly voices, expresses love, and croons to the moon standing atop a grand piano. Watching Isabelle Georges perform for an hour is the most delicious and desirable representation of being frantically and resolutely, musically and theatrically bipolar. Being in a room when Isabelle Georges is performing is to be in the eye of the hurricane, and you will never want to leave.

Heartbreakingly, Isabelle Georges appearance at Feinstein’s/54 Below was a one-night-only performance. Hopefully Ms. Georges will return for more dates in this or any nightclub in New York City. 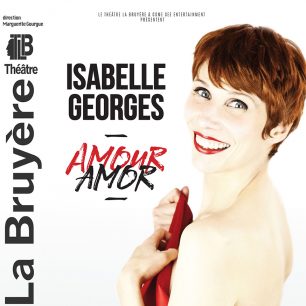 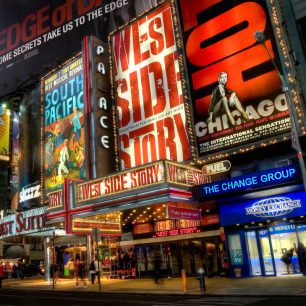